Tips for Today's Matches are being added...
Kindly check back in the hours of 6:30 AM - 2:00 PM GMT. Don't make any hasty predictions!

NB: We take break when there aren't enough matches for the day due to international tournaments, mid-season break or cup competitions etc.

Real Madrid are in Morocco for the Club World Cup and open their campaign with a semi-final against Al Ahly from Cairo, Egypt.

Rayo Vallecano have been on a strange streak of late, alternating away wins and home losses.

This season, the meeting between Barcelona and Sevilla will not have the glamor of a derby that we are used to seeing.

Athletic Bilbao and Cadiz will open round 20 in La Liga when they face each other at the San Mames on Friday night.

Real Betis hosts Barcelona in a postponed match of the 17th round of the Spanish La Liga.

In the last match of the round in the Spanish La Liga, Villarreal faces Rayo Vallecano.

Cadiz host Mallorca in an important game as the hosts are directly involved in the battle for survival in La Liga.

In this 1/4-final pair of the King's Cup, the teams of Valencia and Athletic Bilbao will compete.

The Copa del Rey tournament in Spain is entering its decisive phase. Once it's time for the 1/4-finals.

Undoubtedly, the most interesting clash of the 1/8 finals for the Copa del Rey in Spain will be played in Villarreal.

The program of the round of 16 of the Copa del Rey tournament in Spain opens with this match between Real Sociedad and Mallorca.

The last match of the round in La Liga between Cadiz and Elche appears as a direct battle for salvation in the Spanish football elite.

The Copa del Rey is the only trophy that Atletico Madrid can still realistically claim.

The Spanish Super Cup tournament is being held in the capital of Saudi Arabia again this year for a commercial purpose.

On Saturday evening, we will witness one of the most colorful derbies not only in Spain.

Celta Vigo and Villarreal face each other at the Balaidos Stadium in the opening match of the 17th round of the Spanish La Liga. 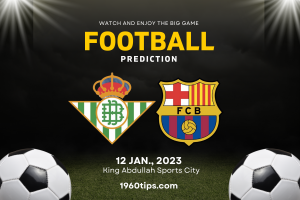 A semi-final match of the Spanish Super Cup tournament to be played at the King Fahd Stadium in Riyadh, Saudi Arabia.

The Spanish Primera is one of the most popular types of betting in Europe, as the Primera División is one of the biggest and best football leagues. It is a competition in which some of the world's biggest football clubs compete with each other and where some of the world's best players have been playing for years, which attracts extra attention from football fans. Betting on Primera is therefore extremely attractive. So, don’t miss out the fun and make your Primera Division predictions today.

In addition, the fact that Spanish clubs often do very well outside their own league means a lot, which significantly increases the popularity of Spanish football clubs. For example, it happened about 30 times that a club from Primera was in the final of the Champions League, which was won 18 times by a Spanish club.

The Primera División is the highest division in the professional Spanish football league. It is a league of top clubs such as Barcelona and Real Madrid and where the best players in the world, Ronaldo and Messi, played for many years, until Ronaldo went to Juventus and Messi to PSG. Regardless of the fact that neither Ronaldo nor Messi are in the league anymore, Real and Barcelona will surely find new stars very quickly, because we are used to that from them. These teams are in action this Saturday, so make your Primera Division Predictions this Saturday. Both clubs always guarantee an exciting game in which beautiful football is played. Those are the two clubs to follow for beginners in Spanish Primera betting, but for more advanced bettors there are many more interesting options to bet on.

So, betting on Spanish clubs is often much more than betting on the Spanish football league. Betting on these matches from Spain means betting on tradition, history and unimaginable rivalry which can be found even in the matches between smallest teams. Pick your Primera Division Predictions this weekend carefully, it’s wise to take a look at the history and rivalry of the teams.

A large part of football bets are placed on matches played in Primera. This is because the Primera División is a very attractive competition to watch. The football played in this league is often very tactical, fast and also very beautiful. Betting on matches in Primera is not only fun, but it can also bring you a solid pocket money and you can make Primera Division Predictions every week.

Of course, you can bet on various matches that are played throughout the season in Primera, but you can also bet on the league winner or the league's top scorer. These are often very safe bets and the bookies' odds are too high.

What can make betting on Spanish Primera even more interesting is live betting on your favorite matches. Most bookmakers now offer live betting on Primera and this makes the whole experience even more exciting and intense, but there are also special bets that you can only place when betting live.