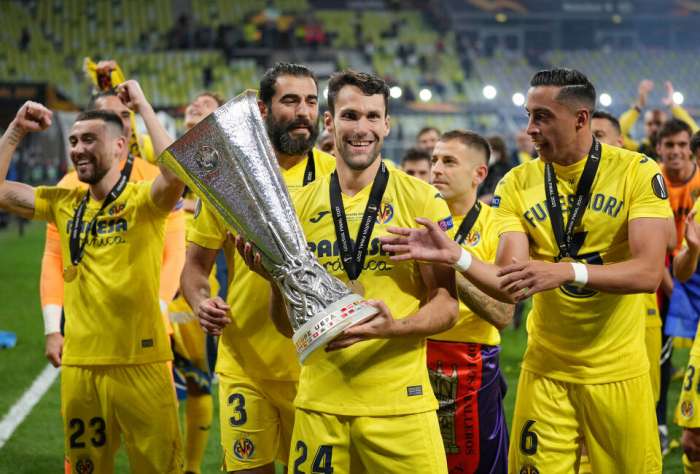 Villarreal grabbed the Europa League trophy after an epic 22-penalty drama against Manchester United. In the regular time at the stadium in Gdansk, Poland, both teams finished 1: 1. Gerard Moreno opened for Villarreal in the first half and Edinson Cavani equalized in the second half. In the penalty kicks, the Spaniards triumphed with 11:10. All 21 penalties were scored by the players of both teams before David De Gea missed.

This is the first trophy in the history of Villarreal from a European club tournament. Team coach Unai Emery proved to be the master of this tournament. This is his fourth success in the Europa League in his fifth final.

The English started the match more actively. After a good attack on the left flank, the ball was sent to Scott McTomini. He controlled the ball and shot on the ground, but in the out. In the 9th minute of the match Juan Voit from Villarreal stepped on the ball and fell very badly. There was even blood from his nose. Fortunately, he left the field on two legs, although blood was running from his nose. Fortunately, he will not be forcibly replaced.

In the 15th minute Villarreal reached their first good opportunity. Danny Parejo centered and Trigerov went to reach the ball, but failed to direct it into the door of De Gea.

In the 29th minute Villarreal scored a goal. Danny Parejo crosses from a free kick from the left on the attack of the "yellow submarine". And Gerard Moreno overtook the defenders of Manchester United and scored with his right foot for 1: 0.

Manchester United tried to respond in the next minutes. Marcus Rashford tried to make several entries on the left flank. And he was passed by Luke Shaw in the 36th minute. He reached the outline and centered, but there a defender of the Spaniards killed the ball.

The second half started with a fight in front of Manchester United. Moreno could have scored, but the Red Devils' defenders cleared the ball.

In the 55th minute Manchester United scored an equalizer. Luke Shaw crosses from a corner, but the ball is killed. Then Marcus Rashford shot, the ball bounced and landed at the feet of Edinson Cavani, who scored for 1: 1. Over a minute VAR checks the hit that was counted.

In the following minutes, the English felt much more comfortable on the field than their opponent. They had a chance to score a second goal, but a shot by Bruno Fernandes passed by Ruli's goal.

Manchester United missed a unique situation. Bruno Fernandes broke away from the right flank and passed into the penalty area, where Marcus Rashford failed to hit the goal from the penalty spot. However, it turned out that there was an ambush of the Portuguese earlier. And shortly after, Luke Shaw made a defender of Villarreal for fun. He tried to shoot, but hit the point so that it hit the head of Cavani, who shot with his head, but the ball bounced into the body of a defender of the "yellow submarine".

In the 84th minute Luke Shaw broke on the left flank and centered low. In the penalty area, Cavani and Greenwood blocked each other and failed to produce a shot. In the 89th minute Shaw tried again and centered, and Pogba shot with his head, but in the out.

Thus, both teams finished 1: 1 after 90 minutes. The match went into two overtimes of 15 minutes each.

The first sequel started with territorial pressure from Villarreal. Manchester United lurked on the counterattack, but no clear goal positions were reached. Danny Parejo cross from a free kick and created tension in front of the English. David de Gea struck with one hand in a corner.

In the 113th minute, VAR considered a potential penalty for Manchester United. A Villarreal player fired a volley, the ball hit the ground and bounced off Fred's hand. However, no penalty kick was awarded. Nothing interesting happened until the end of overtime and so the penalties had to decide the winner.