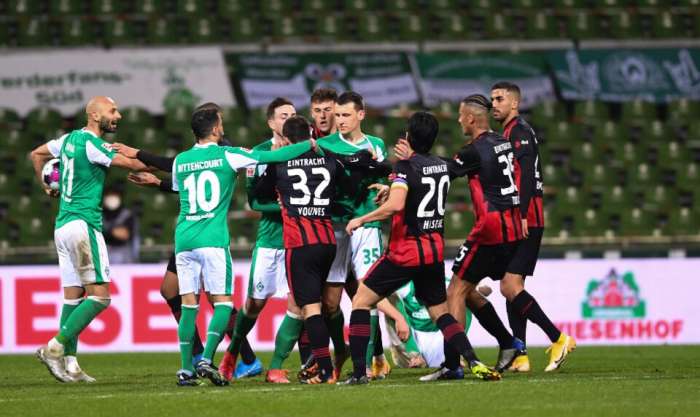 Werder Bremen managed to turn Eintracht to 2: 1 in a match in which video replays abounded to report controversial situations. Thus, Werder stopped Eintracht's killer series of 5 consecutive wins and 11 consecutive games without a loss in the Bundesliga.

In the first half, the guests managed to take the lead through André Silva in the 9th minute, but after the break Werder reached a complete turnaround through Theodore Gebre Salassie and Joshua Sargent.

The first goal for the guests fell after a corner kick. Andre Silva scored with a header. However, the goal should not have existed at all, because the repetitions showed that the referee did not have to award a corner kick, and the ball went out. However, apparently the referee did not receive a signal on time from the VAR referees and the hit was counted. After the repetitions from the coaching staff of the hosts expressed disagreement with the goal, but in the end the result was 1: 0.

In the 17th minute Andre Silva was close to scoring a second goal, but Pavlenka saved.

With 35 minutes played, Milot Rašica nearly put the visitors another one up as he broke through in the middle and fired from just outside the box, but his shot passed just over the bar.

In the second half, a transformed Werder came on the field. After only 2 minutes of play, the "Bremen musicians" equalized. Theodor Gebre Selassie received a great pass in the penalty area, which left him alone against the goalkeeper and he realized. Initially, the assistant referee raised the flag high, which shocked the footballer's emotions, and everyone waited for the situation to be reviewed. It lasted quite a long time, but in the end it turned out that the attacker was in line with the defense and the goal was scored.

In the 62nd minute Werder scored a second goal. Joshua Stargent also found himself alone against the goalkeeper and managed to throw the ball into Eintracht's net for the second time. For the second time, the hosts found themselves in deadly waiting to clarify the situation and the possible ambush of Sargent. It turned out that there was none and the hit was counted.

A little later the situation tripled. This time Romano Schmid put the ball in Eintracht's net, but the review of the situation showed an ambush in the beginning of the attack and Werder missed a third goal.

At the end of the match, there was tension between the two teams, but the players were not expelled.