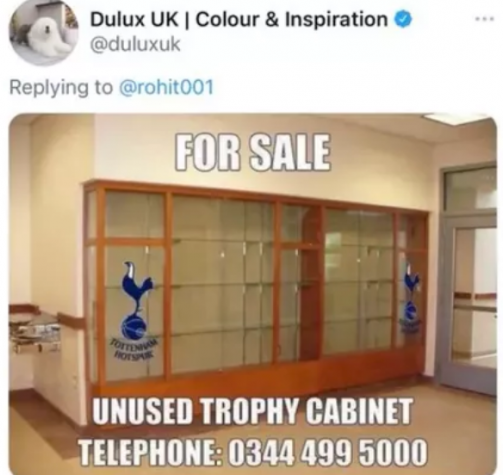 Tottenham has announced a new sponsor - a company for paints, latexes and varnishes. Hours after the partnership was officially announced, the company's official Twitter account joked with the Spurs.

Under Tottenham's post on social networks, jokes and banter rained down from fans who suggested that the company store its products in the club window of the London team because it is empty.

Tottenham's new sponsor responded to the offer with a photo of a fabricated advertisement for the sale of the shop window in question, because it is unnecessary. They later found out to a fan that before painting the surface should always be clean and not covered with dust.

Tottenham's deal with the company was announced with a picture of a dog. The shot also provoked playful comments from fans. One of them said that the dog in the photo could do the job of manager Jose Mourinho in the center of defense. The paint and varnish company's response was, "Maybe it'll work better."

A little later, Tottenham's new partner apologized sincerely for his funny comments on Twitter, which did not like the "spurs" and their fans.