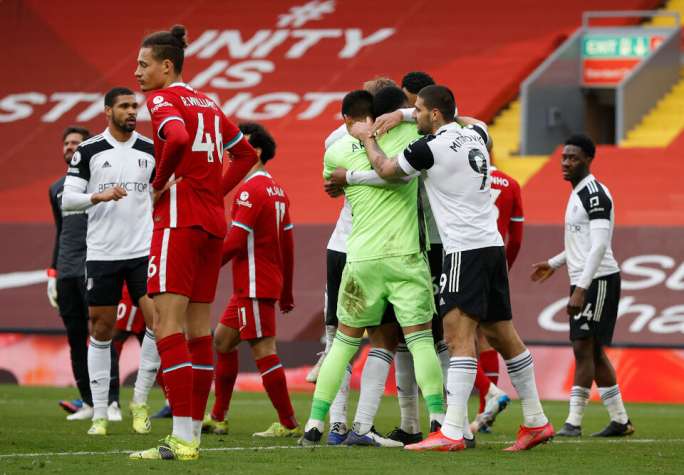 Liverpool lost 0-1 to Fulham in a match of the 27th round of the Premier League. For the Merseysiders, today's defeat is the sixth in a row at Anfield, after last week the team of Jurgen Klopp broke the club's anti-record for five consecutive home losses in the English elite.

The only goal in the match was scored by Mario Lemina at the end of the first half.

After the loss, Liverpool remained in seventh place with 43 points, while Fulham was 18th with 16 points, equal to 17th in the standings Brighton. Thus, the Cottages took an important step towards their survival in the Premier League.

The guests started the match better at Anfield and got the first chance to score in the match. John Maja tried an acrobatic kick after a cross in the penalty area by Kenny Tete. However, the ball went past the door of Merseyside.

In the 11th minute Ademola Lukman made a dangerous shot that went dangerously close to the side of the door.

In the 19th minute Mohamed Salah also missed a good goal opportunity. From a good shooting position, the national team of Egypt sent the ball out.

Ten minutes before the break, Lukman controlled the ball and entered the penalty area of ​​Liverpool. He tried a shot in the near corner, but Neko Williams intervened and cleared.

In the 39th minute, Jerdan Shakiri had the opportunity to fire at Fulham's goal from a direct free kick. However, the ball went over the door.

The Cottages took the lead at the end of the first half. Mohammed Salah risks on the edge of his own in the penalty area. He did not clear, and Mario Lemina managed to steal the ball and with a great kick on the ground sent it into the net for 1: 0.

Shortly after the break, Liverpool failed to restore equality. Diogo Jota shot dangerously, but Alphonse Areola saved. Salah was in a good position to add, but the guard of the guests managed to catch the catch in front of his eyes.

Liverpool pressed, but it was difficult to reach goal positions. In the 53rd minute Andrew Robertson centered to Shakiri. However, Areola was careful and managed to intervene before hitting his door.

In the 70th minute Sadio Mane intercepted a cross with his head, but from close range sent the ball out.

Two minutes later, Shakiri tried a shot from the edge of the penalty area, but Areola was well positioned to intervene.

Until the last referee signal, Fulham skillfully killed the pace of the match with multiple interruptions. The hosts did not have the necessary creativity in front positions and collected another defeat at Anfield.

In the earlier match of the English Championship, West Bromwich and Newcastle did not score and ended in a draw 0: 0 in the battle at the bottom of the table. The Thrushes needed a victory that would bring them closer to salvation. For now, the team led by Sam Allardyce remains in serious danger of relegation. West Brom are penultimate with 18 points, 8 from the safe zone. Newcastle ranks 16th with 27 points.