Ronaldo shuts down critics with hat-trick against Cagliari 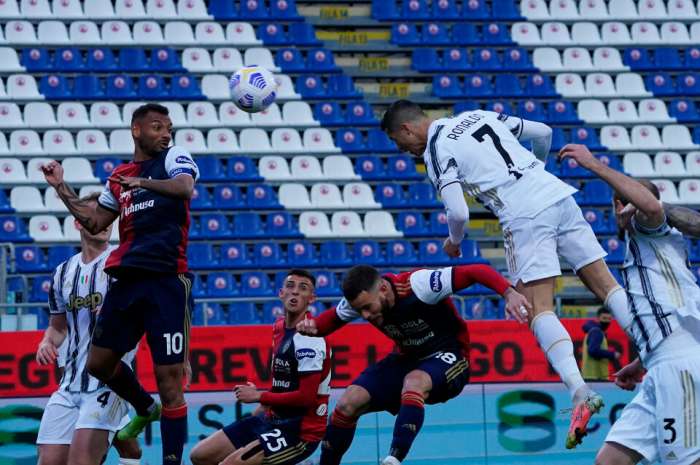 Juventus won 3-1 away to Cagliari in the 27th round of Serie A. Bianconeri star Cristiano Ronaldo, who was under target after the team's relegation from the Champions League, scored a hat trick in the first 32 minutes of play and shut up to his critics.

Giovanni Simeone returned one of the goals, but the hosts did not have the strength for anything more in the match.

After his first goal, Ronaldo was lucky that he was not sent off with a direct red card for a very dangerous game against the opposing guard Alessio Cranho.

After the success, Juventus still looks very far from the title. The team led by Andrea Pirlo is third with 55 points, ten behind leader Inter. Earlier today, the Nerazzurri won 2-1 as a guest of Turin.

The match started in the best way for Ronaldo and company, who took the lead in the 10th minute. Juan Cuadrado crosses from a corner kick and Ronaldo hits the ball into the net with a great header.

In the 14th minute came the sporting moment when Cristiano was lucky not to be sent off. It was obvious that the Juve star was giving his best and chasing every ball to the end. However, he came in with the buttons forward and kicked Alessio Cranho, but the referee missed the red card. He received only an official warning.

In the 22nd minute Federico Chiesa found Alvaro Morata in the penalty area, but the Spaniard missed from a very good position to sign. His shot didn't bother Cranio, who caught it without a hitch.

A few minutes later, Morata is largely revenge for his omission from a while ago. He centered well in the penalty area to Cristiano Ronaldo. The Portuguese overtook Cranio and the guard fouled him. Referee Gianpaolo Calvarese pointed to the white dot. Behind the ball stood Ronaldo, who scored for 2: 0.

In the 32nd minute, Cristiano scored his hat trick. Chiesa found him in the penalty area and with a great kick with his left foot left no chance for the goalkeeper of the hosts.

Before the break, the Portuguese had a chance for a fourth goal, but he almost managed to overcome Cranio again.

At the beginning of the second half Cagliari picked up the pace and actively looked for a goal. In the 61st minute Giovanni Simeone, who is the son of Diego Simeone (coach of Atletico Madrid) reduced the gap of the hosts. Gabriele Dzapa centered in the penalty area and Simeone sent the ball into the net behind Wojciech Szczesny.

Five minutes later, Joao Pedro was knocked down in the penalty area by Adrien Rabio. Cagliari was asked to take an 11-meter penalty kick, but the judge ruled that there were no illegal actions against the captain of the "Sardinians".

In the 73rd minute, Juventus demanded a penalty for a violation against Cristiano Ronaldo, but Calvarese again remained silent.

In the following minutes, the pace of the game slowed down and there were no serious goal dangers, although Ronaldo continued to harass Cagliari's defense. Deep in added time, the 36-year-old Portuguese missed his fourth goal of the match. He took control in the penalty area and shot, but the ball was aimed in the center of the door and Cranio saved without a problem.

In the end, until the last referee signal, the result remained unchanged - 3: 1 in favor of Juventus. In the next round of Serie A, the Bianconeri will meet Benevento, while Cagliari will visit Spice