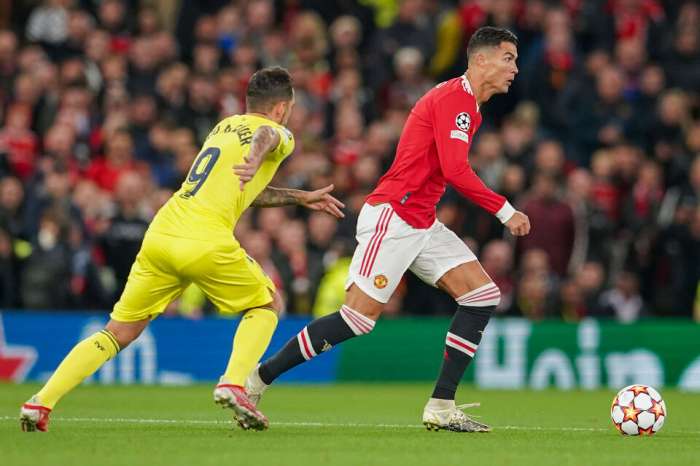 Manchester United superstar Cristiano Ronaldo brought victory to Manchester United in the match with Villarreal in the Champions League. The match of group "F" ended with a success with 2: 1 for the "red devils", as the Portuguese scored in the 95th minute.

Villarreal took the lead in the 53rd minute of the match with a goal by Paco Alcácer. A little later, United managed to equalize after a great goal by Alex Teles, who scored with a volley from the edge of the penalty area. In the fifth minute of the extra time given by the referee, Ronaldo scored from close range.

After its first victory in this year's edition of the Champions League, Manchester United ranks third in Group F with 3 points. So is the second - Young Boys. The leader is Atalanta with 4. Villarreal are last with only 1 point.

United created the first danger in the match in the second minute. Cristiano Ronaldo brought out excellently Bruno Fernandes with the penalty area and he shot, but the ball went high over the crossbar.

A little later, Villarreal responded with a strong blow to Arno Danjuma, which, however, was deflected by David de Gea.

In the 10th minute, David de Gea saved United from a sure goal. Danjuma was well placed in the home team's penalty area, shooting sharply on the diagonal. However, the guard of the "red devils" showed a great reflex and killed.

The Spanish team continued to press their opponent and in the 16th minute Danjuma tried to bring Paco Alcácer alone against De Gea, but a United defender made a split at the last minute and intercepted the pass.

Just 60 seconds later, De Gea saved United from a sure goal. After Danjuma's cross, Paco Alcácer shot from close range with his head, but right at the Spanish guard, who shot into a corner.

In the 21st minute, Alberto Moreno made a very strong shot in the direction of the home team's goal, but did not hit the ball well and it flew high over the crossbar.

The Spaniards continued to press their opponent, but never managed to reach a goal.

In the 30th minute, Unai Emery's players created another danger in front of De Gea's door. Paco Alcácer was brought to a good position and shot, but along the right crossbar.

Manchester United reached a good situation in the 39th minute when Bruno Fernandes centered in the penalty area, Ronaldo shot from a small angle, but not accurate enough to hinder Rui.

In the 43rd minute the hosts could take the lead in the match. After a cross in the penalty area, Albert Moreno tried to clear, almost sending the ball into his own net.

Seconds later, David de Gea once again saved United from a goal. Jeremy Pino received the ball in the penalty area of ​​the "red devils", feigning a defender of the hosts and shot, but the English guard intervened perfectly and killed.

Villarreal took the lead at the beginning of the second half. Danjuma entered well in the penalty area of ​​United and passed parallel to the goal line. Paco Alcácer overtook the Red Devils' defense and sent the ball into David de Gea's net from close range.

Bruno Fernandes tried to equalize a little later with a strong shot from the edge of the penalty area, but the ball went past the door of Eronimo Rui.

In the 60th minute, the "red devils" equalized. Bruno Fernades centered in the penalty area, where a defender of Villarreal cleared. However, the ball landed on the feet of Alex Teles, who with a great volley from the diagonal did not leave any chances to the guard of the guests.

United were very close to making a complete turnaround in the 79th minute. Diego Dalott centered great in the penalty area, where Edinson Cavani shot with his head from close range, but inches from the right crossbar.

Villarreal could have scored a second goal in the 86th minute. My Gomez went diagonally into the penalty area and fired hard. De Gea managed to score, but the ball hit Bowlaye Dia, who tried to overcome the guard with his chest, but without success.

United won in the fifth minute of the extra time given by the referee. After a long shot, Eronimo Rui saved, but the ball landed on the feet of Cristiano Ronaldo, who from close range scored and brought the three points to his team.