Portugal won the last European Football Championship in 2016, but next year they will have the very difficult task of defending the title. Cristiano Ronaldo and company were included in the defined as "death group", where they will face the teams of Germany, France and one of the winners in the playoffs. Group F matches will be played in Budapest and Munich, as Portugal is not among the hosts of the championship. This can be decisive, so which two teams will move forward. We should review the Portuguese team for Euro 2021 and see what we can expect from the selection of Fernando Santos.

See our analysis for the Portuguese team for the postponed European Championship and how far we think they will go.

Portugal at the European Championships - history and success

The biggest success in the overall football history of Portugal was the triumph of the European Championship in France in 2016. The victory came very difficult with 1: 0, after a goal scored in overtime by Eder. Fernando Santos' team won the final against the hosts from France. In the previous stages, Portugal eliminated the teams of Wales, Poland and Croatia. The Portuguese brought the first European title in the country, as the previous best performance was a final - in 2004, when they hosted and surprisingly lost to the modest team of Greece. In 2012, Portugal reached the semifinals of the tournament, and this is the 5th time in this phase of the competition.

How does Portugal qualify for Euro 2021?

Portugal's ranking for next year's European Championship was not easy. They finished second in qualifying group B. The "Sailors" collected 17 points in 8 matches, with 3 points less than the winner in the group - Ukraine and 3 points ahead of our neighbors from Serbia. It cannot be said that this was an easy qualifying campaign for the selection of Fernando Santos. Portugal recorded 5 wins, 2 draws and 1 loss, scoring 22 goals and getting 6 in their own goal. The team was firm against the weaker teams in the group - Luxembourg and Lithuania, but there were a lot of problems in the matches with Serbia and Ukraine. The important thing is that the team won the battle with the Serbs for second place and will try to defend its title at the European Football Championship in 2021.

Portugal is in Group F of Euro 2021 with the teams of Germany, France and the winner of the playoffs A (D).

The composition of Portugal for Euro 2021

Portugal has very good players in its squad, most of them playing in the leading European championships. Of course, the biggest name in Fernando Santos' selection is Cristiano Ronaldo. The names of Bernardo Silva, Joao Moutinho and Bruno Fernandes make the biggest impression among the others. Experienced goalkeeper Rui Patricio is the number one choice at the gate, and in front of him as defenders will most likely be Jose Fonte, Rafael Guerrero, Joao Cancello and Ricardo Pereira. The young talents of Joao Felix and Ruben Neves are expected to be an important part of the squad for Euro 2021.

The final lineup of Portugal has not yet been announced, but as soon as it becomes available, we will publish the 23 Portuguese players. 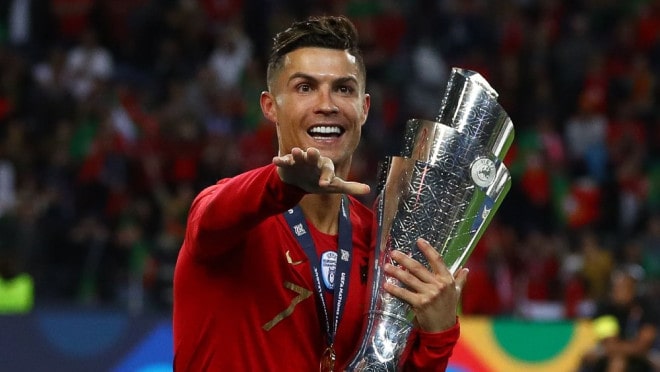 Undoubtedly the biggest star of Portugal, and of world football, is the striker of Juventus - Cristiano Ronaldo. He is the best player in Serie A for 2019, he has been voted several times as the best player in the English Premier League and La Liga. For the national team, Ronaldo has 99 goals in 164 appearances. Although he is the best player in Fernando Santos' team, Cristiano will need the support of his teammates in his quest to lead his country to a second consecutive European Championship title. Ronaldo is the player with the most matches in the World Cups - 17. He participated in the championships in 2006, 2010, 2014 and 2018. Cristiano is also the player with the most goals in European finals for Portugal - 9.

Prediction: how far will Portugal go?

The task of Portugal, as the current winner of the trophy, will be quite complex. The draw was not very favorable for them, but they have all the prerequisites to earn enough points to proceed to the direct eliminations. In the 1/8 finals, the team may have a difficult opponent, and what will happen next is difficult to predict, but we are of the opinion that Ronaldo and company will not reach the decisive match again. In our opinion, Portugal can reach the maximum in the semifinals.

As we have already mentioned several times, Portugal is in a really heavy group. This is our personal opinion, but maybe bookmakers think the same way. They do not consider it very likely that the "sailors" will win the group and thus move on to the next phase. Portugal is also not among the top 5 favorites to win the European title in 2021. Here are the current odds for Cristiano Ronaldo and company: