Messi, sanctioned with two games for his expulsion in the Spanish Super Cup 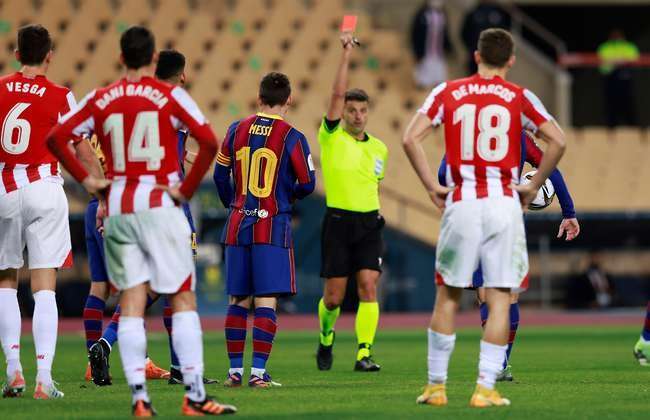 Competition Committee has sanctioned Leo Messi with two games for his expulsion in the Spanish Super Cup against Athletic after slapping Asier Villalibre when the extension was about to end. The Argentine, in this way, would miss the Copa del Rey match against Cornellá and the League match against Elche , both away from home, but the club has decided to appeal the punishment.

Messi sanction for expulsion in the Super Cup FinalThe description of Gil Manzano’s play in the minutes did not speak of aggression, so the article on “violence in the game” (123.2) has been applied : “At minute 120 the player (10) Messi Cuccittini, Lionel Andres was sent off for the following reason: Hitting an opponent with his arm using excessive force while the ball was in play but not at a distance from being played, “the referee wrote in the minutes.

The precedents of this season already indicated that Messi would fall two games and not four, as it would have been in the case of being considered aggression. Charles , from Pontevedra, and Grego Sierra , from Sabadell, were sanctioned with two meetings with a drafting of the minutes very similar to that of Gil Manzano.

This is Messi’s first expulsion for Barcelona in 754 games. If Barcelona pass the Copa del Rey round, the Argentine will return in the round of 16 of the cup tournament. If Barça falls to Cornellá, the ’10’ will return precisely again to Athletic at the Camp Nou, in a league match. A duel in which the faces with Villalibre could be seen again.

Barcelona’s last two games without Messi ended in a draw, against Eibar at the Camp Nou in the League and against Real Sociedad in the semifinal of the Spanish Super Cup, a match that Barcelona ended up winning in the penalty shoot-out. Without the ‘Flea’, everything indicates that Koeman will choose to place Griezmann in his position and Braithwaite as a forward.