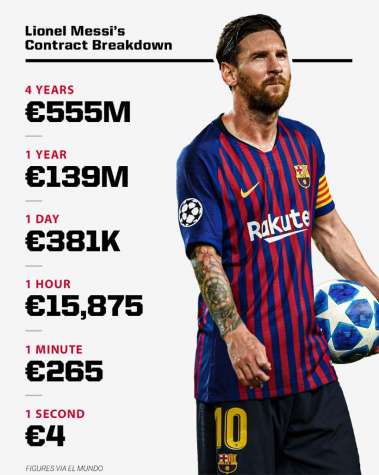 The newspaper "El Mundo" revealed that according to the contract between Lionel Messi and Barcelona, ​​signed in 2017, the Argentine received 555 million euros - a fixed 138 million per season, plus bonuses. More than 115m euros have been paid as a bonus for re-signing and another 78m euros as a loyalty bonus.

Both Barcelona and Messi have announced that they will file lawsuits against the Spanish daily for the information provided.

It is said that only five people knew about the details of Messi's contract with Barcelona.

Statisticians have calculated how much Messi earns per second.

The Argentine earns an unrealistic 381 thousand euros per day, 15,875 euros per hour, 265 euros per minute. Under this contract, Messi earns 4 euros per second.