Messi did it again, took the seventh "Golden Ball" 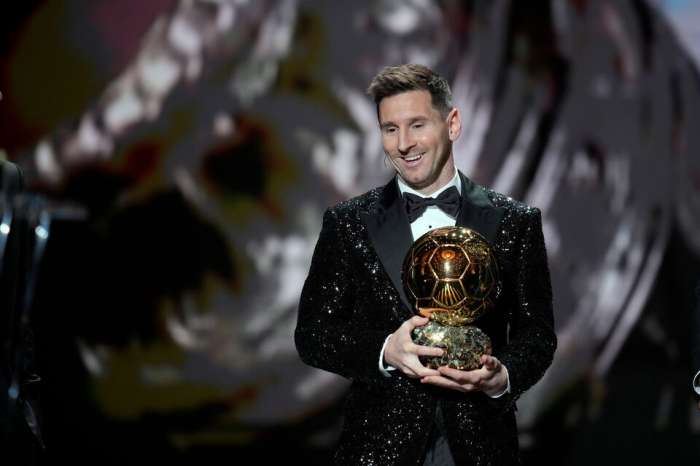 Lionel Messi won for the seventh time the most valuable individual award in world football - the "Golden Ball". He overtook Bayern Munich striker Robert Lewandowski for the prize. Chelsea midfielder Jorgeninho, who triumphed at the European Championship with Italy in the summer, came third in the final standings. He was followed by Karim Benzema from Real Madrid and N'Golo Kante from Chelsea.

When Luis Suarez gives the #ballondor to Messi! pic.twitter.com/uUHhMgtVfR

170 journalists from all over the world took part in the election. Each of them nominates five players from a list of 30 names, ranking them from first to fifth position. 6 points are awarded for the first place, 4 for the second, 3 for the third, 2 for the fourth and 1 for the fifth.

The national guard of Italy and footballer of Paris Saint-Germain Gianluigi Donaruma received the award for "Goalkeeper №1" in the world for the past year. He was chosen as the winner of the competition of Ederson from Manchester City, Manuel Neuer from Bayern, Edouard Mendy from Chelsea and Jan Oblak from Atletico Madrid.

Donaruma has performed very well over the last year. The young goalkeeper won the European Championship with Italy, and after that he made a transfer from Milan to Paris Saint-Germain.

Barcelona midfielder Pedri won the Copa Award, which is given to the best young footballer in the world last year. The young midfielder overtook his colleagues Bucaio Saka, Mason Greenwood, Jude Bellingham, Jamal Musiala and Gio Reina for the award.

Bayern Munich goal scorer Robert Lewandowski won one of the latest awards of France Football - for "Forward №1" in the world for the past year. Another new prize, for "Best Club", was won by Chelsea.

The striker of the year award goes to… Robert Lewandowski! #ballondor pic.twitter.com/OEy9mlSjki

- Ballon d'Or #ballondor (@francefootball) November 29, 2021
Barcelona midfielder Alexia Puteas won the Women's Ball. The captain of the Catalans fought for the award with four other ladies. The other big favorite for the title was the Chelsea player - Sam Kerr.

Paris Saint-Germain superstar Killian Mbape has announced the winner, who scored 20 goals in 42 games for Barça last season and was credited with winning the title in the Primera Division, the Champions League and the Copa de la Reina.

The ceremony began with the presentation of the players in the Top 10 of the ranking. The №1 awards for men and women were brought by Formula 1 drivers Fernando Alonso and Sebastian Ocon. They received T-shirts with the autographs of Pedri and Killian Mbape. France Football has already revealed what is in the top 30.

On the 20th position is the Algerian wing of Manchester City Riyad Marez. Lautaro Martitens from Inter and Bruno Fernandes from Manchester United share the 21st position. Tottenham striker Harry Kane came in 23rd. Behind him are Pedri Gonzalez from Barcelona (24) and Phil Foden from Manchester City (25). In 26th place in the ranking remained three players - Gerard Moreno from Villarreal, Ruben Diaz from Manchester City and Niccolo Barrela from Inter. Two players were ranked 29th - Cesar Aspilicueta from Chelsea and Luka Modric from Real Madrid.