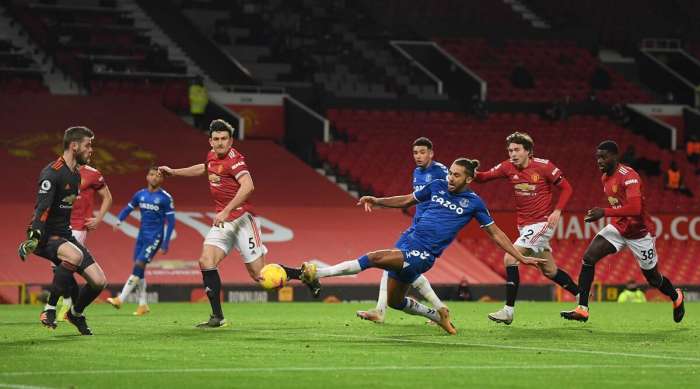 Manchester United failed to beat Everton in one of the derbies of the round in the English Premier League. The Red Devils and the Caramels did not win after a goal thriller with 6 goals and a 3: 3 draw, which United can seriously regret.

At halftime, the team led 2-0 (after goals from Cavani and Fernandes), but at the beginning of the second half, in just a few minutes, Everton scored two quick goals and equalized (through Dukure and Hames).

However, Ole Gunnar Solskjaer's players managed to get ahead again in the result through Scott McTominey, who intercepted a header from a direct free kick. In the last seconds of the match, however, Calvert-Lewin took advantage of a misunderstanding in the opponent's defense and with the last touch in the match brought the point for his team.

Thus, United remains two points behind city rival Manchester City, which, however, is two games less. Everton, on the other hand, climbed to 6th place and remained 3 points out of the top 4. The Red Devils will play West Ham for the FA Cup (Tuesday, January 9) and West Bromwich in the Premier League (Sunday, February 14). ). The Caramels play Tottenham in the FA Cup (Wednesday, January 10) and then Fulham in the championship (Sunday, February 14).

52 2: 2! Just seconds later, Manchester United's lead was completely erased. Jaime Rodriguez received a pass in the penalty area and without delay for a second shot very accurately and left no chances for De Gea.

70'-3: 2! United regained the lead in the result. Luke Shaw cross from a direct free kick, and Scott McTominey somehow managed to hit the ball with his head, after which it entered the bottom corner of Olsen's goal. There were impressions that the guard was too late to intervene and could have done better.

90 + 6 '- 3: 3! Calvert-Lewin carries Everton's point after taking advantage of a mix-up in United's penalty area in the final seconds of the match.

FIRST HALF
In the first third of the half, neither team was able to put pressure, dominate or create goal positions. The two goalkeepers never had to intervene, since there were no eye shots, even more so 100% goal situations.

24 '- 1: 0! The Red Devils came out ahead in the result. Marcus Rashford cross perfectly from the right, and the ball reached Edinson Cavani in the goal area, who could not help but score with his head.

45 '- 2: 0! After the first goal, United raised the level of their performance and deservedly doubled their lead. Bruno Fernandes with a phenomenal transfer kick from the edge of the penalty area materialized the superiority of his team.

BEFORE THE DUEL
In the last round, Manchester United showed serious muscles and scored 9 goals at Southampton, which seemed to put an end to the short fall of the club and two consecutive games without a victory in the Premier League, which lost the first place.

Now, however, a more serious test in the face of Everton. The "Caramels" stayed for a long time in the top 4 during the campaign, but they also declined and are currently in 7th place with 4 points less than the 4th - city rival Liverpool (Everton, however, is with 2 matches less).

Carlo Ancelotti's players are on the rise in recent matches, but they will look for victory today no less than the players of Ole Gunnar Solskjaer. The problem for the "caramels" is that for 4 consecutive games they are without a victory against United, recording 2 defeats and 2 draws.