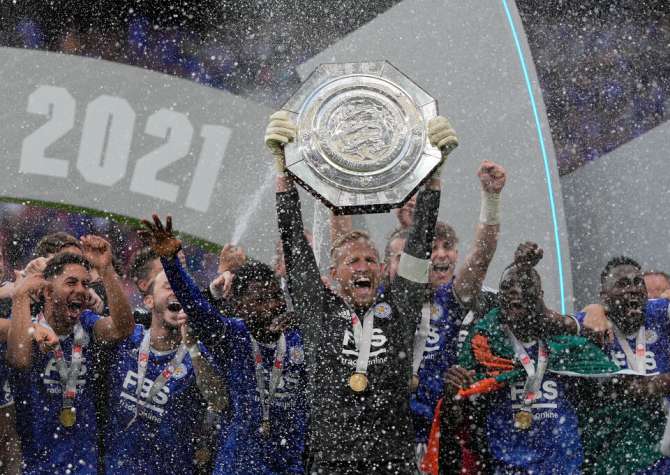 Leicester beat Manchester City 1-0 in the Community Shield match. The Foxes reached their moment and reached the trophy with a goal from a penalty seconds before the end of regular time.

The match was completely equal, until Nathan Ake made a fatal mistake, after which a penalty was awarded in favor of Leicester. Kelechi Iheanacho executed the penalty kick relentlessly and for the second time in his history Leicester won the Community Shield after 1971.

At the same time, the "citizens" lost for the first time in the tournament under the leadership of Josep Guardiola.

Man City made his debut for Man City, who appeared on the field in the second half in place of Samuel Edouzi.

After an equal start, Leicester made the first more dangerous blow to one of the two doors. In the 18th minute Jamie Vardy made room for a shot and looked for a goal, but Zack Stefan managed to react and killed.

Five minutes later, Verdi found himself in a clear shooting position again, and Stefan intervened and kept his net dry.

In the 28th minute, Samuel Edouzi took control of Leicester's penalty area, but sent the ball high over the crossbar.

At the end of the first half, both teams squandered a good goal opportunity. In the 44th minute Ilkay Gungodan shot from the edge of the penalty area, but inaccurately. Seconds later, after a stir in the penalty area, Jamie Vardy found himself uncovered with a ball in his foot. The striker tried to finish, but Zack Stefan had positioned himself very well and managed to save with a body.

An hour after the start, Riyad Marez managed to overcome several opposing defenders and made a shot from the edge of the penalty area, but the ball flew to the side.

In the next minutes, the physical stock of the players visibly ran out. Both managers - Josep Guardiola of Man City and Brendan Rodgers of Leicester tried to refresh their teams, but without success. The new addition Jack Greenish, who made his debut with the Manchester team, even appeared on the field for the "citizens".

When it seemed that a goal in the regular time could not fall, Leicester received the right to execute a penalty after a terrible mistake by Nathan Ake. The defender was the last defense when he tried to return to his goalkeeper. Kelechei Iheanacho, however, lurked for a mistake and managed to steal the ball, and Ake fouled him. Chief Justice Paul Tierney had no choice but to show the swamp. Behind the ball stood Iheanacho, who realized with a powerful shot in the upper left corner of the door.

By the end, Leicester kept their fragile lead and the festivities began with the last referee's signal.

A week later, both teams start their participation in the Premier League. In the first round, Man City host Tottenham, while Leicester rivals Wolverhampton.