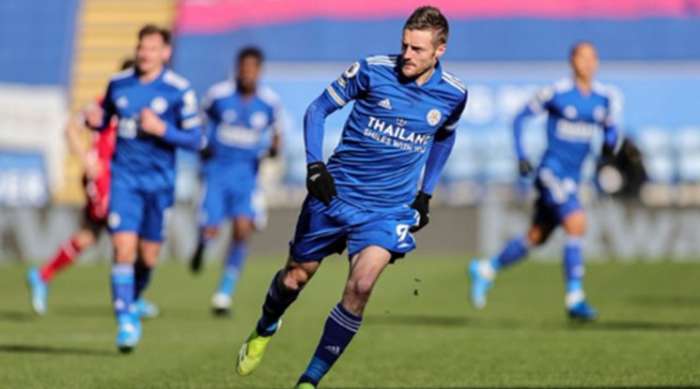 Leicester City beat Liverpool 3-1 at the King Power Stadium in the derby of the 24th round of the English Premier League. Mohamed Salah opened the scoring in the 67th minute. James Madison equalized in the 79th. Three minutes later, Jamie Vardy made a complete turnaround. Harvey Barnes went up 3-1 five minutes before the end.

Liverpool started much more actively. In the tenth minute, Henderson brought Salah very well behind the back of Leicester's defense. However, Ricardo Pereira reacted quickly and pressed the Egyptian, who failed to strike a good blow, after which he fell. Salah had claims for a penalty, but they were not respected. Just two minutes later, the Liverpool goal scorer again wanted an 11-meter penalty kick after a duel with Ricardo. This time the contact was visible, but Salah fell quite slightly and no signal followed again.
In the 16th minute, Jürgen Klopp had to make a forced substitution after Milner was injured. In his place appeared Tiago.

A minute later, Salah returned to the shooting position after clearing after a corner in front of Schmeichel's door. The shot was inaccurate.

In the 20th minute, Alexander-Arnold brought very well Salah, who tried to find Mane to the far post, but there Amarti intervened. Shortly afterwards, Salah released very well in the penalty area to Firmino, who shot from a small angle, but Schmeichel killed. In the 27th minute, Leicester's guard reacted brilliantly again after a new shot by Firmino, who intercepted from a few meters. Here, however, the lineman's flag was raised, marking an ambush, so that even if there was a goal, it would not be counted.

In the 36th minute came the first better opportunity for Leicester. Barnes centered well on the left, and Vardy hit with his head, but sent the ball straight to Alison, who caught without a problem. This was the first accurate shot for the hosts.

In the 39th, the Merseysiders launched a very good attack, which went through Alexander-Arnold, Salah and Firmino to reach the opposite flank, where Robertson shot on the ground, but the ball bounced in Amarty and came out of the far post.

Three minutes before the break, Leicester had their big chance in this first half. A long pass from Amarty was deflected by Madison in the way of Vardy, who shot forward at speed and shot, but the ball hit the crossbar. Doubts remain as to whether Leicester's goal scorer was in an ambush.

Just before the break, Vardy broke away again after a mistake by Henderson, but Alison came forward and saved with his foot.

In the 57th minute and the guests hit the crossbar. This happened after Alexander-Arnold took a good direct free kick. The ball bounces first in the wall and then in the crossbar.

Liverpool seriously increased the pressure and Leicester could not transfer the action to the opponent's half at all. This logically led to a goal in the door of the "foxes". In the 67th minute Tillemens made a mistake in taking the ball, after which Alexander-Arnold broke on the right. His first attempt to cross was blocked, but then the right back made a second. Firmino turned very elegantly to take the ball between two defenders and at the same time return it to Salah, who shot extremely technically in the far corner - 0: 1.

In the 76th minute Barnes tried to enter the penalty area between Alcantara and Alexander-Arnold. The Brazilian tripped the opponent. The dispute was whether the offense was in the penalty area or outside it. After the intervention of VAR, it was decided that it was in front of the line and the ruling was for a direct free kick. Madison shot low to the far corner and the ball went into Alison's door. The goal was initially canceled due to an ambush by Amarty, who tried to intercept and influence the guard of the guests. However, the VAR charts showed that the Leicester player was in a clear position and the goal was scored.