Juventus would also replace Roma in the standings, Ronaldo with the first goal at 36 years old 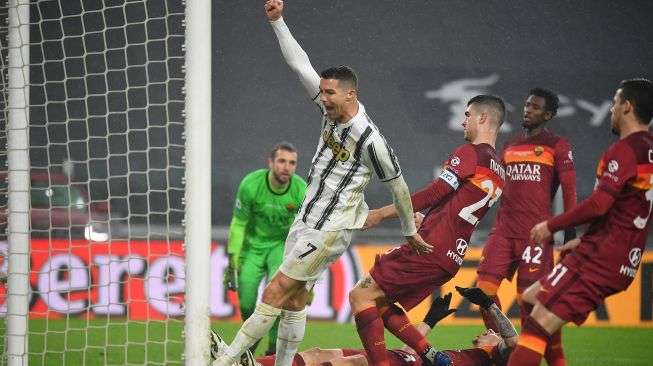 Juventus beat Roma 2-0 in the derby of the round of the Italian Serie A. With the success of the "Bianconeri" moved the "wolves" from 3rd place in the standings and came close to the Milan giants Milan and Inter.

The first goal of the match was the work of the big star Cristiano Ronaldo, who made a unique gift for his 36th birthday, which he celebrated yesterday, on February 5th. Ronaldo scored with his weaker left foot from the edge of the penalty area without preparation.

The "old lady's" lead was doubled in the second half when !banes scored an own goal. The guests from Rome never managed to score a goal, although they played at a very good level and created several clean situations in front of Szczesny's goal.

The difficult series of matches for Juventus continues. A visit to Inter in the rematch of the semifinals of the Italian Cup (09.02), a match against Napoli in Serie A (13.02), as well as a visit to Porto in the first round of 16 of the Champions League.

SECOND HALF-TIME
In the second half, Juventus improved their performance and began to hold the ball more than their opponent. In the first quarter of an hour of the second half, however, there was no more dangerous situation in front of either door.

69-2: 01 The Bianconeri doubled their lead in the result. Quadrado brought Kulushevski to the flank, as the Swede tried to return parallel to the goal line to Ronaldo, but there !banes threw himself into the split, catching the ball in his own goal.

FIRST HALF
The guests started the match more actively and controlled the pace, but nevertheless Juve struck their blow with their first opportunity. 13 1: 0! Sandro fought on the flank, combined with Morata, who handed the ball to Ronaldo. The Portuguese shot without force from the edge of the penalty area with his weaker left foot and opened the score.

In the 23rd minute, the Portuguese was close to another goal, again against the background of a better game by Roma. Ronaldo shot from the penalty area and after a ricochet in an opposing player, the ball bounced off the crossbar and almost flew into the net.

In the last minutes of the part there was a third chance for Juventus and he was again for Ronaldo. Cristiano received a pass from Morato in perspective, as the Portuguese shot in motion, but Roma's goalkeeper reflected well and shot away.

BEFORE THE DUEL
The hegemon of Italy in recent years has been seriously threatened with the abdication of the throne. Juventus must keep mistakes to a minimum until the end of the season if they want to continue with the Serie A titles. At the moment, however, the team is in 4th place.

This may change today, as the "Bianconeri" meet 3rd in the standings - Roma, which is a game more than Juve. This is undoubtedly the derby of the round in the Italian Serie A, as the stakes are very high for both teams.

Roma is enjoying a great season and will hope to qualify as early as possible. The Wolves have 40 points, Milan are second with 46 and Inter are first with 47, with a game more than the city rival and Roma.