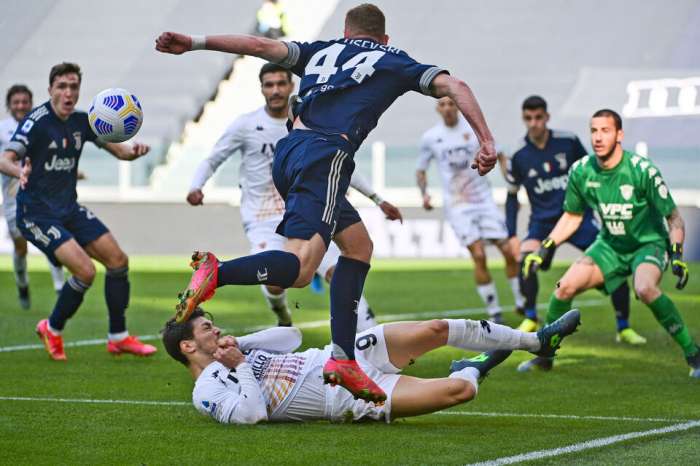 The newcomer to the Italian championship Benevento presented the big surprise by beating the reigning champion Juve 1-0 in a match of the 28th round. The three points for the guests were brought by Adolfo Gaić, who scored in the 69th minute.

After the surprise defeat, the "old lady" remains in third place with an asset of 55 points, 10 behind the leader Inter with 11 rounds left until the end. Benevento, in turn, ended its negative streak of 11 consecutive championship games without a win and is 16th with 29 points.

Before the start of the match, the president of Juventus Andrea Agnelli handed Cristiano Ronaldo a T-shirt with the inscription "GOAT" and number 770 - the record number of goals of the striker.

The first opportunity to score was opened in front of the Portuguese. In the 3rd minute he had a chance to shoot, but sent the ball inches past the door.

In the 24th minute the ball was centered from a direct free kick. Alessandro Tuya managed to shoot with his head, but inaccurately.

In the 33rd minute Alvaro Morata tried and made a dangerous shot, which was saved by Lorenzo Montipo.

Two minutes later, the referee awarded a penalty for a handball to Dam Fullon. However, VAR intervened and it was decided that there were no grounds for a penalty kick.

Five minutes before the break, Cristiano Ronaldo sent the ball into the net of Benevento, but a goal was not correctly counted due to an ambush.

At the beginning of the second half, Juventus continued to be the more active team, firing on the opponent's goal, but Montipo did not have to intervene decisively.

This led to the 69th minute, when Benevento took advantage of a blunder and took the lead. Arthur made a mistake with his pass to Matthias de Licht. Gaich was the first to reach the ball and sent it into the net without hesitation.

Ten minutes before the last referee signal, Cristiano Ronaldo missed a very good opportunity to restore the tie. His shot was saved by Montipo. A corner kick followed, and the Portuguese tried back scissors, but a defender blocked.

Two minutes before the end of the regular time, the guard of the guests intervened again after a shot by Ronaldo. By the end, Juventus failed to overcome Montipo and Benevento won three points.