How did football change a year after George Floyd's death? 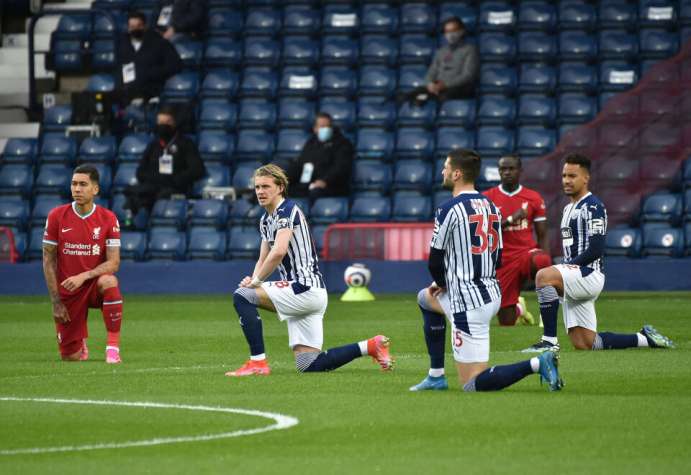 A little over a month ago, former Minneapolis police officer Derek Chauvin was convicted of the murder of George Floyd. The case shook the whole world and this provoked a wave of protests about racism and police violence, and through football the public was sympathetic. Premier League players and managers discuss how much football has changed one year since Floyd's assassination.

"The murder of George Floyd was the straw that broke the camel's back," said Aston Villa and England defender Tyrone Mings.

During the incident, English football was stopped due to the coronavirus, and the match between Aston Villa and Sheffield United was the first match to take place in a pandemic. The players of both teams knelt before the start of the match, and their names on the backs of the shirts were replaced with the message "Black Lives Matter".

"We wanted to take a kneeling position before the game and that's going on right now," said Sheffield United striker David McGoldrick.

The gesture was repeated by all teams in the Premier League, and Manchester City midfielder Kevin De Bruyne provided one of several memorable images when the players knelt en masse.

"Honestly, I don't know if it has had a big impact, because we are still witnessing so many racist insults online and things like that," said the Belgian national.

The only black manager in the Premier League last season, Wolverhampton coach Nuno Espirinto Santo, believes the game is progressing in the fight against racism, but says the road is long and football cannot be complacent.

"I am fully aware that a year has passed since the incident with George Floyd. "I think things have changed and football is more resilient in the fight against racism, so we must continue to persevere, to insist, until the message reaches everyone," said the Portuguese.

When football came together to condemn plans to create a European Super League, Leeds striker Patrick Bamford raised the question of why people are not as enthusiastic about fighting racism and systemic discrimination.

"It's amazing how much noise is made in the game when someone's interests are at stake. It's a shame that not everyone reacts this way against racism, "Bamford said.

Manchester United manager Ole Gunnar Solskjaer agrees with Bamford, adding that football has shown that he can unite when needed.

Striker David McGoldrick is calling for tougher and tougher penalties for fighting racism in the game. "We need the same energy for racism. Bigger than the one against the European Super League. "

Kevin De Bruyne also believes that change is in the hands of decision-makers and those in power.

Tyrone Mings believes that there will be no quick fixes when it comes to counteracting and improving diversity at every level of the game.

In March this year, Crystal Palace winger Wilfred Zaha became the first player to refuse to kneel before the start of each match. He believes the protest has lost its impact and has suggested players stand up to end the racial inequality that blacks face. His decision has sparked serious controversy, but Aston Villa manager Dean Smith is sympathetic to his position, knowing where Zaha comes from.

Manchester City manager Pep Guardiola is one of the people who often expresses his opinion on the fight against racism. He says the Premier League is at the forefront, giving players the opportunity to highlight issues of racial injustice and systemic discrimination.

"We will start with a new generation and everything we do will be good. We have to try day after day. We will not succeed in one day, it will take decades, but everything we can do, we must do, "said Guardiola.