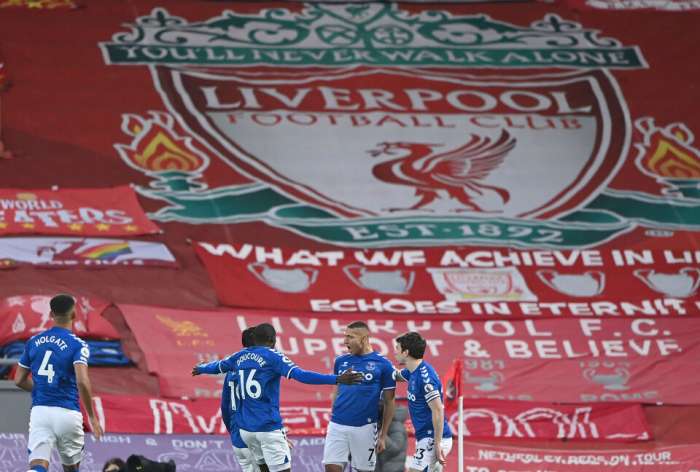 Everton won the 2-0 derby against Liverpool at Anfield in the 25th round of the Premier League. The 236th derby between the two teams was decided after goals from Richardson and Gilfi Sigurdsson from a penalty. In this way, the "caramels" recorded a very important victory. This is Everton's first victory at Anfield in the new century and also the first victory over Liverpool since 2010.

Everton took the lead in the 3rd minute. Yozan Kabak kicked the ball at the feet of Abdullai Dukure, who immediately combined with Hames Rodriguez. The Colombian sent an excellent pass behind Kabak to Richardlison, who jumped out alone against Alison and sent the ball into his door.

Jordan Pickford made a great save in the 20th minute after an air shot by Jordan Henderson. Two minutes later, Trent Alexander-Arnold made a strong shot from distance, but Pickford managed to touch the ball and kill it in a corner.

Henderson received a sprain in the 25th minute. The Liverpool captain tried to continue his participation in the match, but was eventually replaced by Nathaniel Phillips.

Everton could have scored a second goal in the 32nd minute. After a cross in Liverpool's penalty area, Andrew Robertson dropped Seamus Coleman, who jumped behind him and shot with his head, but Alison saved.

Sadio Mane made a dangerous header in the 47th minute, but right in the hands of Pickford.

Richardson scored in the 48th minute, which was disallowed due to an ambush.

Roberto Firmino made a weak shot in the 56th minute, which did not hinder Pickford.

Liverpool missed to equalize in the 69th minute. Roberto Firmino combined with Jerdan Shakiri, who brought Mohamed Salah alone against Pickford, but the Everton goalkeeper quickly shortened the distance and saved.

Everton organized a very dangerous counterattack in the 80th minute. Tom Davis made a very good pass to Richardson, who brought out Dominic Calvert-Lewin, he shot, but Alison saved his shot, after which the Everton striker was tripped by Trent Alexander-Arnold. Judge Chris Cavanaugh played a penalty for the Caramels, then reviewed the VAR situation and upheld his decision.

The penalty kick was scored by Gilfi Sigurdsson in the 83rd minute and Everton took a 2-0 lead against Liverpool.

Roberto Firmino had a good opportunity in the 85th minute, but his shot was not accurate.

Jordan Pickford made an excellent save in the third minute of added time of the match when he deflected a shot by Vainaldum.

Everton's last victory at Anfield was in September 1999. The Caramels have been unbeaten in their last 20 away games against Liverpool.

The Reds suffered a fourth consecutive loss in the Premier League and a third in a row at Anfield.

Liverpool and Everton are sixth and seventh with 40 points each, with the Reds one place ahead due to a better goal difference. However, the team led by Carlo Ancelotti has one game less.