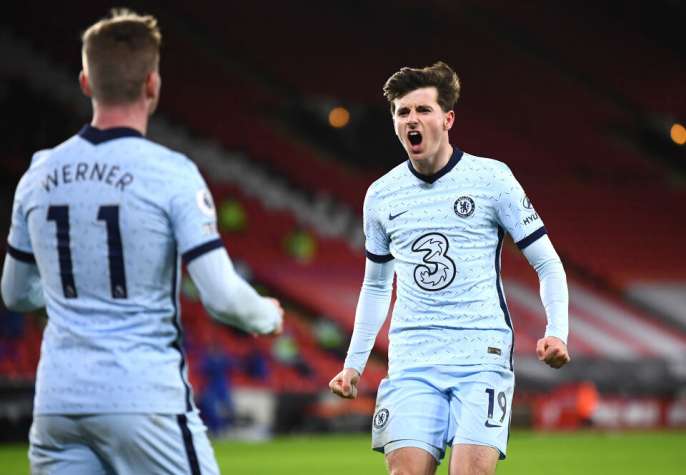 Chelsea achieved a third consecutive victory under the leadership of Thomas Tuchel, after winning 2: 1 in the visit of Sheffield United to "Bramal Lane" in a match of the 23rd round of the Premier League. The goals for the "blues" were scored by Mason Mount and Jorgeninho from a penalty, and Antonio Rüdiger scored an own goal.

Sheffield United made the first serious mistake in the match before the first minute. Cesar Aspilicueta made a mistake and gave the ball to Oliver McBurney, who immediately passed to Oliver Burke, who came out in a great position alone against Edward Mandy in the penalty area of ​​Chelsea, but shot away from the right post, in the out.

Chelsea made a very serious mistake in the 6th minute. Mateo Kovacic sent a pass to Timo Werner, who jumped alone against Aaron Ramsdale. The German striker transferred the goalkeeper, but his shot was not strong enough and Chris Bashum managed to clear the ball.

Referee Kevin Friend played a penalty for Sheffield United in the 12th minute after marking Ben Chillwell's foul on Chris Bashum. The situation was dealt with by the VAR and the penalty was revoked because Bashum was in an ambush at the time of the pass.

Chelsea took the lead in the 43rd minute. Ben Chillwell combined very well with Timo Werner, who invaded the home team's penalty area, then sent a great pass to Mason Mount, and he scored the ball in the bottom left corner of Aaron Ramsdale's goal.

Sheffield United surprisingly equalized in the 55th minute when Antonio Rüdiger scored a ridiculous own goal after poor communication between him and Edouard Mendy.

Keane Brian made a very blunder in the 56th minute when he gave the ball to Timo Werner, who jumped alone against Rumsdale and dropped the ball past him, after which he was knocked down by the Sheffield goalkeeper in the penalty area. Initially, Kevin Friend ignored the situation and the game continued, but then the referee received a signal and considered what happened in the penalty area of ​​the hosts with VAR. Friend corrected his initial decision and played a penalty for Chelsea. The penalty kick was taken by Giorgino in the 58th minute and the Londoners regained their lead in the match - 2: 1.

Antonio Rüdiger had to intervene decisively in the 72nd minute and clear the ball just before the goal after a foul by Oliver Norwood.

John Fleck made a good breakthrough in the 75th minute and invaded Chelsea's penalty area, but Antonio Rüdiger made a good split and prevented more danger in front of Edouard Mendy's goal.

In added time, Edouard Mandy made a decisive save, reflecting the blow of Billy Sharp.

With this victory, Chelsea is in fifth place in the standings with 39 points, trailing only one of the fourth Liverpool. Sheffield United are last with just 11 points.