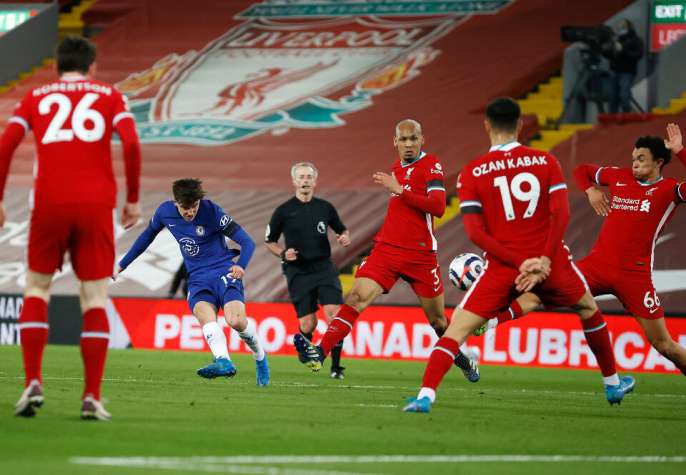 Chelsea won their visit to Liverpool with a minimum of 1: 0 in a clash in the 29th round of the Premier League. The only goal of the match was scored by Mason Mount shortly before the break.

With the success, the Londoners climbed to fourth place in the standings of the English Championship with 47 points.

For Liverpool, today's loss is historic. For the first time in their history, the Merseysiders lost five consecutive games at Anfield. The team led by Jurgen Klopp dropped to seventh place in the table with 43 points.

The Blues definitely outplayed their opponent and deservedly congratulated themselves on the success. The fact that the hosts in today's match made their first accurate shot five minutes before the end of regular time speaks for itself.

In addition, Liverpool have not scored a goal at Anfield for 10 hours. The goal that the "reds" scored for Manchester City in the 1: 4 loss a month ago was from a penalty.

The match started equally with a slight home advantage. The first blow was made to Edward Mandy's door. However, there was no need for intervention by the Chelsea guard, as Andrew Robertson sent the ball past the door.

In the 11th minute, the first good opportunity opened up for the Londoners. Timo Werner mastered a long pass and shot from the arc of the penalty area, but inaccurately.

Five minutes later, a player of the hosts hung, and behind him lurked Timo Werner, who from a clear position did not make a good shot and failed to hinder Alison Becker. Seconds later, Chelsea played well, and Cesar Aspilicueta tried a shot from the edge of the penalty area, but sent the ball high above the crossbar.

In the 24th minute, Timo Werner was brought out with a long pass behind the defense of Liverpool. Alison Becker left the penalty area in an attempt to cross a pass. However, the attacker of the guests overtook him and then put the ball into the net. Doubts about an ambush remained. After the first repetition of the situation, Werner seemed in a clear position, but VAR intervened and eventually the goal was canceled.

Four minutes later, Mohamed Salah found Sadio Mane in the penalty area. However, he failed to orient himself quickly enough and failed to strike.

In the next minutes, Chelsea was the more active team and deservedly took the lead in the result before the break. The Blues took the ball and matted the opponent's defense with a quick counterattack. N'Golo Cante sent a long diagonal pass to Mason Mount, who entered the penalty area and with a precise shot sent the ball into the bottom left corner of the door.

At the beginning of the second half, the ball met Kante's hand and Liverpool demanded a penalty, but the chief referee Martin Atkinson ruled that there were no grounds for such. The VAR system also remained silent, which was strange because the defensive midfielder's hand was not in a natural position and an 11-meter penalty kick could definitely be awarded in the situation.

In the 54th minute Chelsea was very close to a second goal. Ben Chillwell received a penalty in the penalty area and fired. The ball went past Alison Becker's plunge, but a Merseyside defender cleared the goal line.

In the next minutes, Liverpool was the team that had more control of the ball, but Chelsea played successfully on the counterattack and was the more dangerous team.

After 77 minutes, the visitors got a chance to reduce the score when a counterattack went by. Mason Mount broke and passed to Timo Werner, who found himself alone against Alison Becker. However, the Merseyside guard very skilfully shortened the corner and did not allow the attacker to overcome it.

Five minutes before the end of regular time, Liverpool organized a dangerous attack, which ended with a header by Georgino Vainaldum, which, however, did not hinder Edward Mendy.

Until the last referee signal, Liverpool tried to get at least a draw, but the defense of the guests held back and congratulated them on the final success.