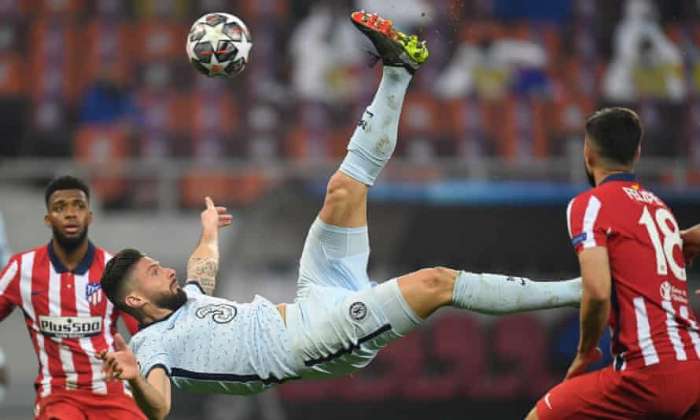 Atletico (Madrid) and Chelsea played an extremely contested and strong clash in their first match of the round of 16 duel of the Champions League . In the end, the "blues" from London were more active and deservedly came to victory with a minimum of 1: 0.

Olivier Giroud became a hero for Chelsea, who scored in a very beautiful way in the middle of the second half - with back scissors. Thus, the French striker gave his team an advantage before the rematch between the two teams, which is after 3 weeks.

SECOND HALF-TIME
In the first 20 minutes of the second half again, as well as throughout the first half, both teams had a hard time creating clear goal positions. The pace of the game seems to have dropped even more, as the big tactical tension between the two coaches is obvious, no one wants to risk looking for victory.
In the 68th minute Olivier Growl scored with back scissors in an extremely attractive way with back scissors. The goal was considered with VAR for a few minutes, but the repetitions showed that Hermoso played with the ball before it went to the striker, so there can be no ambush.

FIRST HALF
The 14th minute saw the first serious situation in front of one of the two gates, after Suarez fought well on the outline with a Chelsea player, went inside and passed to the second post, but there Hudson-Odoi was a little late and not managed to direct the ball into the empty door from a small angle. Seconds later, the "blues" from London came to a very similar situation, in which Werner failed to catch the ball just outside the door of Cloud.
In the 39th minute Timo Werner got well in the penalty area by Stefan Savic and tried a shot from a small angle. Cloud, however, was perfectly placed and had no problem kicking the ball away from him.

BEFORE THE DUEL
Atletico enters the match with the confidence of a leader in La Liga, despite the loss to Levante in the last round. But Chelsea are more confident after the team was led by Thomas Tuchel and the results in the Premier League improved. Atletico, however, is a difficult obstacle for any team.
For the last 10 years the two teams have met in the European tournaments 5 times. The last time this happened was in 2017 in the group stage of the Champions League. Then in Madrid the "blues" beat 2:1, and in London the two teams drew. The English left the group and the Spaniards went to the Europa League.