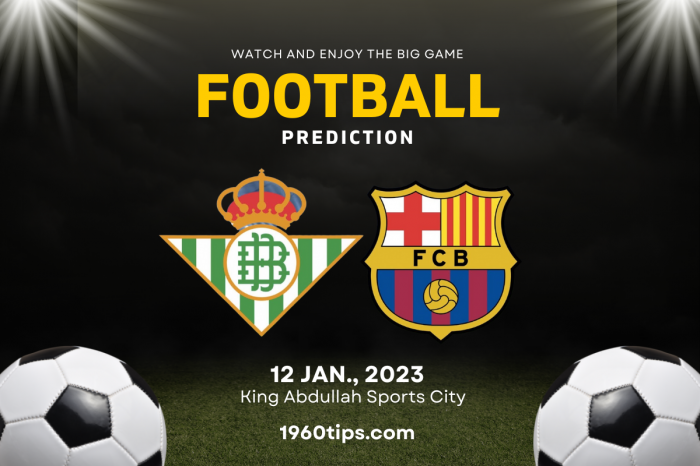 A semi-final match of the Spanish Super Cup tournament to be played at the King Fahd Stadium in Riyadh, Saudi Arabia.

The winner of today's meeting will meet the team that won in the pair Real Madrid - Valencia .

Betis entered a tough schedule of important matches every 3 days. And that could play a bad joke on them today.

Because their bench is definitely less competitive than Barcelona's.

In addition, Blaugranas manager Xavi will have another trump today - Robert Lewandowski .

The Pole has had plenty of rest, having not played since December 31 due to suspension.

He will lead the attack for his today. And I imagine he will score at least once, and probably more, in the Sevilla goal.

This will help Barca to another victory over Sevilla, after 8 wins in the last 10 games against them.

Real Betis' squad should arrive in the Arabian Peninsula in high spirits.

After the team managed to pull off a 2-1 win in a tough away game in the capital against a tough Rayo Vallecano team.

What was even more valuable about this success was that it ended an unpleasant streak .

Namely – 3 consecutive games without a win in La Liga (2 draws and 1 loss) before that.

With the 3 points gained from this match, Manuel Pellegrini's formation returned to the top 4 of the standings.

Because he stated that Betis are going to Saudi Arabia to try to beat Barcelona.

As an additional motivation and for himself, the mentor will strive to avoid defeat.

As Pellegrini has lost more than 70% of his matches against Barcelona in his coaching career.

But on the other hand, the Green and Whites do not have a negative balance in their 9 matches against Barca especially for the Super Cup (4-1-4).

Barca will also be confident.

A hard-fought 1-0 win over Atletico Madrid on Sunday extended their unbeaten run to seven in all competitions.

Of which 5 wins (in regular time).

Meanwhile, the Blaugranas restored their 3-point lead at the top of the Primera Division standings.

Not without the help of their eternal enemy Real Madrid, who conceded a loss against Villarreal.

Catalans manager Xavi will be further boosted by the return of top striker Robert Lewandowski.

Who is absent against Atlético due to suspension.

Especially since Barcelona have not lost an official game when Lewa has scored (10 wins and 1 draw).

The Catalans may need his striking power to improve on their recent lackluster performance in this competition.

Having lost five of their last seven Super Cup games .

However, they remain the all-time record holder in this tournament.

However, they are yet to triumph in the current 4-team tournament format, which was introduced in the 2019/20 season.