Barcelona waved goodbye to the title after a spectacular draw 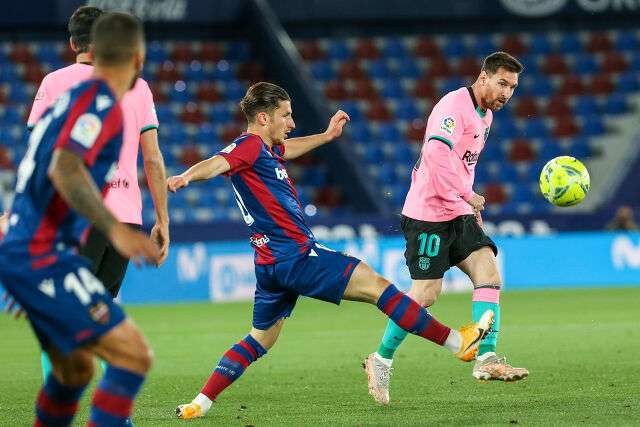 Barcelona missed a two-goal lead and finished 3-3 away to Levante in the 36th round of La Liga. In this way, the Catalans practically said goodbye to all their chances for the title in the Spanish championship. The team led by Ronald Koeman has lost 7 points in the last four games.

In the 2nd minute there was an opportunity for Barcelona, ​​but Pedri's shot was not accurate. Three minutes later, Pedry jumped alone against Aitor Fernandez, and after his shot the ball hit the left pillar of the door of Levante.

Barcelona took the lead in the 25th minute when Jordi Alba centered in the penalty area of ​​Levante, where Miramon tried to head, but sent the ball in the way of Lionel Messi, who with an air shot sent the ball into the bottom left corner of the door of Fernandez.

Jordi Alba had a good opportunity in the 28th minute, but his shot was not accurate.

Barcelona doubled their lead in the 34th minute when Usman Dembele made an excellent breakthrough in the penalty area of ​​Levante, then deflected the ball to Pedri, who scored in the empty net.

Levante reduced their deficit in the 57th minute when Miramon centered in the penalty area of ​​Barcelona, ​​where Gonzalo Melero was dropped by Sergio Roberto and headed the ball into the door of Marc-Andre ter Stegen.

Levante managed to equalize the score in the 59th minute, when the Catalans made a very blunder in their half. Roger Marty doubled with Jose Morales, who with a great diagonal kick put the ball in the left corner of Ter Stegen's goal.

Barcelona took the lead again in the 64th minute. The ball bounced off Miramon's foot and hit Usman Dembele, who was alone against Aitor Fernandez and scored with great force in the top right corner of Levante's goal.

Levante managed to equalize in the 83rd minute, when Tonio passed to Sergio Leon, who shot in the near corner of Ter Stegen and scored for 3: 3.

Barcelona is second with 76 points, lagging behind one of the leaders Atletico Madrid, but the team led by Diego Simeone has a game less, and Real Madrid is third with 75 points and also a game less. Levante is thirteenth with 40 points.