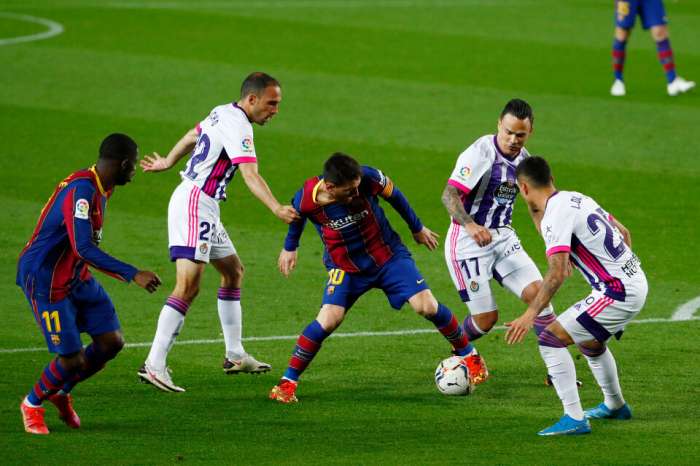 Barcelona shortened the distance with Atletico Madrid at the top of the Primera Division standings by just one point after beating Valladolid 1-0. The only goal in the match fell in the extra time given by the referee and was given to Usman Dembele. The guests ended the match with 10 people, after in the 79th minute Oscar Plano was sent off with a direct red card.

The guests from Valladolid started the match more actively and reached the first danger in front of the opponent's door in the 9th minute. After a cross in the penalty area Kenan Codro shot with his head from the penalty spot, but the ball hit the crossbar. A little later, Messi fired dangerously from a foul, but near the door.

In the next minutes the two teams exchanged several more dangerous attacks, but no goal was scored. In the first minute of the extra time given by the referee, Barça was very close to scoring. Pedry controlled a bouncing ball and fired instantly. Jordi Masip managed to react by hitting the crossbar and thus saving his team from a goal.

In the middle of the second half, Barcelona had several excellent goal opportunities. First, Usman Dembele tried to threaten Masip, but his shot was caught. Seconds later, Griezmann fired his head past the left side pillar. In the 64th minute, the players of Valladolid had claims for a penalty, but after consideration with VAR, the referee decided that there was none.

Shortly before the last referee signal, the guests were left with one less person. Oscar Plano fouls one of the players from the opponent's team and receives a direct red card. Ronald Koeman's players tried to take advantage of their numerical advantage and eventually came to such an important goal. Its author was Usman Dembele in the 91st minute. Ronald Aruaho deflected a cross in the penalty area with his head, the most resourceful being the Frenchman, who sent the ball into the visitors' net from close range.

After the victory, Barcelona collected 65 points and is only one of the leaders Atletico Madrid. The third Real is with 63. Valladolid, on the other hand, is on the 16th position with 27.