After the humiliation: Lionel Messi exchanged shirts with PSG ace 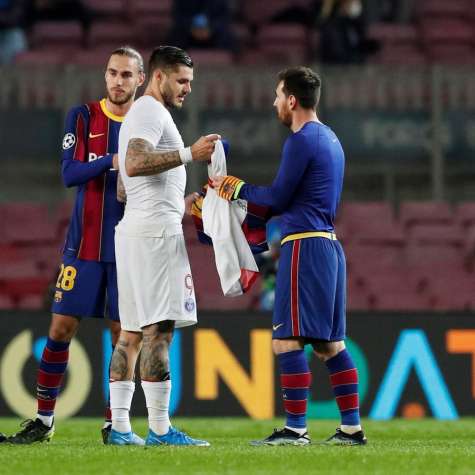 Barcelona superstar Lionel Messi once again had to endure the humiliation of his team's heavy defeat in the Champions League. The Catalans were hit at home with a resounding 1: 4 by PSG, which was one of the most difficult losses for the "blaugrana" in Europe, especially at home.

However, after the last referee's signal, La Pulga did something that we have rarely seen him do on the field - to exchange his shirt with an opposing player. Messi is not a fan of the long tradition, but still sometimes performs it as a gesture to a player who asked him for his shirt. However, this happens even less often when his team loses.

However, the defeat by PSG was an exception and after the clash he took the shirt of Mauro Icardi. The gesture between the two is even more surprising, based on the fact that for years there has been speculation that the two are in conflict and Leo is the main reason for the rare calls for Argentina that the PSG player receives. However, the tomahawk between the two seems to have been forgotten.

Of course, fans on social media suspected that this could be another indirect proof that Messi could move to PSG after the end of the season . As is known, the Argentine has an expiring contract at the "Camp Nou" and wanted to leave last summer. Once a new president is elected in Barcelona, the club's N'21 priority will be to keep the legendary footballer, but there are a few problems that will arise. One is certainly Leo's own desire to leave, and the other is the colossal sum that Messi receives in Barcelona .