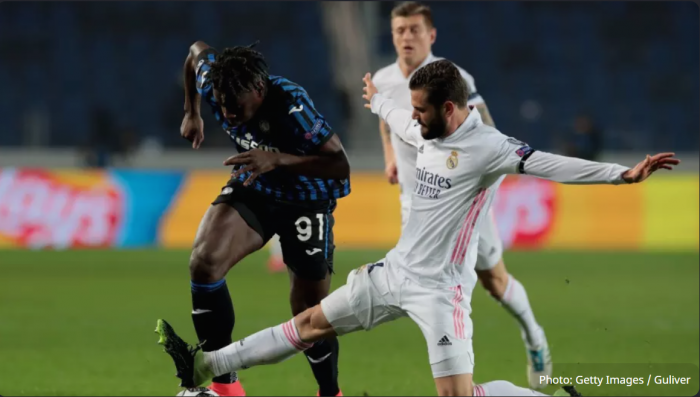 After an early red card in Italy, Real Madrid seemed to have an easy task to beat Atalanta as a guest, but this did not happen. On the contrary - the "kings.' did not have a single clear position in the meeting and did not hinder the guard of the Bergamas in any case. In 86', however, a moment of brilliance decided the match.

In a corner, the ball was played on short passes and reached Ferlan Mendy. The left defender decided to shoot from 23 meters with his weaker right foot, but sent the leather ball inescapably in the upper left corner - a goal and a triumph for Real in Italy.

It was the second goal for the left-back in 2021, which brought valuable success to the "kings", who were assisted early by the red card of Froyler, who stopped a clear goal position, tripping Mandy in front of the penalty area.

However, the situation for Real is not easy before the rematch. Atalanta have achieved two away triumphs this season - against Ajax and Liverpool. In addition, Casemiro received a yellow card and will miss the rematch against the Italian team. Adding the situation with the many injuries at Real, the expectations are for an interesting rematch.

FIRST HALF
In the 15th minute Real Madrid "caught" their opponent in a quick attack, as the "whites" played with one touch and Vinicius brought Mandy perfectly at speed in front of the penalty area. He was the first to reach the ball and was rudely tripped in front of Froyler's penalty area. The referee did not hesitate and showed him a direct red card.

Surprisingly, after the red card Atalanta had the initiative in the next minutes and Zapata and Maele missed good situations in the opponent's penalty area. Gasperini, however, undertook a defensive rotation, removing Zapata and releasing Pasalic to take a position in front of the team's defense.
After 30 minutes, Real Madrid set their own pace in the game and managed to create several dangerous situations. In 34 'Isco received a ball in the penalty area, with a skillful feint managed to change direction and shoot with his left foot, but past the door. A few minutes later, the combination of 15 'between Mandy and Vinicius was repeated, as the Brazilian invaded the penalty area and shot, but a defender managed to shoot into a corner.

SECOND HALF-TIME
Immediately after the break, Real had another situation to score. Modric found himself in a shooting position about 10 meters away, but after a ricochet the ball went inches away from the door.

Zinedine Zidane made an interesting substitution later, taking out the most active player in attack Vinisuis and releasing Mariano. However, this did not lead to the desired result, as the "whites" continued to be easily predictable and boring in attack. There were almost no positions in front of Atalanta's goal, and after the 60th minute the hosts had several interesting attacks, from which no goal was scored.

Zidane completely renewed his attack after removing Isco and Asensio, and in their place appeared Hugo Duro and Sergio Aribas - both part of the team's school and in the main lineup due to the serious number of injuries in the selection of "white ballet".

Although it seemed impossible for Real to reach a goal, such still fell in 86', and in a sensational way. The Whites took a corner with short passes and the ball reached the front of the arc of the penalty area, where Mandy controlled and with his weak right foot sent an inescapable shot in the upper left corner - a great hit by the left fullback.

WHERE TO WATCH THE MATCH ATALANTA - REAL MADRID

BEFORE THE MEETING:
The 13-time European club champion Real Madrid will play another match of the eliminations in the Champions League , after visiting the insidious team of Atalanta in the first match of the eighth-final clash between the two teams in the tournament.

In fact, this turned out to be the number 100 anniversary match for the eliminations in the Champions League for Real - an achievement that is incomprehensible to any other team. The "Royal Club" will try to take a good result and not to reach the third consecutive elimination in this phase of the competition.

However, there is a contender for the top 4 in the Italian Serie A, who is famous for his very strong attack. Apart from that, there has already been a lot of talk about the extremely crippled group with which Real left for Bergamo.

Zidane will not be able to use the injured Karim Benzema, Dani Carvajal, Eden Hazard, Marcelo, Eder Militao, Sergio Ramos, Federico Valverde, Alvaro Odriosola and Rodrigo, which will severely limit his options for substitutions during the match. had to use juniors from the second team.